Joyce Homan grew up in the countryside of Herkimer, New York, near where her family had roots in the upstate area for several generations. Her mother sparked her interest in charity at a young age and her father encouraged her tomboy instincts making her feel that she could try anything. Her view has always been to live life with open arms and create her life around that openness.

“I love being thought of as a philanthropist,” stated Joyce, “though that is a rather pretentious word for me.” As an activist, artist, teacher and contributor to many causes, she has no trouble filling up her time with any number of important activities.

Living and giving were central to both Joyce and her late husband, Ray. Joyce and Ray both lived through The Great Depression and therefore viewed material goods as secondary to compassion and experience.

As a child, Joyce doodled in the margins of her math papers, so it was only natural that she chose to attend the Buffalo State Teachers’ College to become an art teacher. Ray served in World War II and went to engineering school at Massachusetts Institute of Technology. 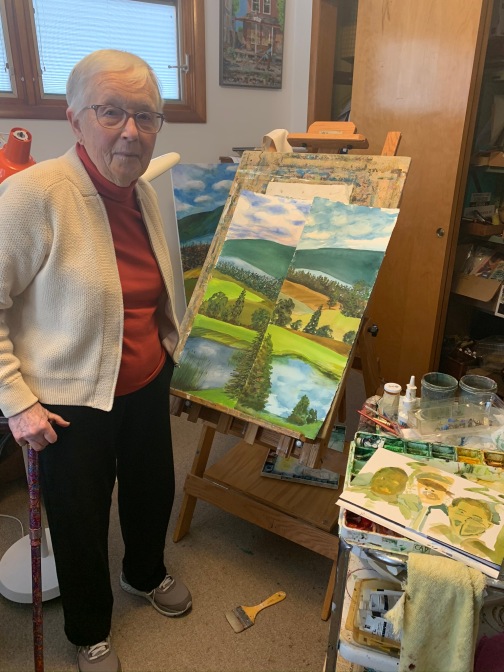 Joyce stands in her art studio which is filled with current and past paintings.

Ray eventually shifted professions from engineering to education and joined Joyce at Jamesville-Dewitt Middle School, where they taught science and art respectively. Joyce laughed as she remembered that their own children were not so happy about having both of their parents at school with them every day.

“It was a very, very bad idea! But we all survived and it worked out in the end,” she said.

Ray and Joyce enjoyed their summers off with their four children. Together, they hiked all over the United States and Europe, sometimes living out of a Volkswagen bus. Their children are grown now, working in information technology, as a pilot, a doctor and with animals and music. Joyce is grateful that all of her grandchildren will go through college debt-free, thanks to Ray’s diligence.

Joyce believes that everyone should be a philanthropist, in whatever way they can.

To build on that statement, Joyce recalled an event in 1973 while there was a terrible gas shortage across the nation. Her brother had died and the family needed to attend the funeral in Vermont. In an unexpected moment of charity, the Jamesville-Dewitt Middle School janitor siphoned gas out of his own car’s tank so they could make it to Vermont. “Those moments really shift your whole perspective on who can be a philanthropist.”

When the Homans met Bud and Nancy Haylor (long-time friends of the Community Foundation) at an Elderhostel in Italy, they learned about donor-advised funds. Joyce recalled thinking that this sounded like a good, simple option for their giving as well.

Joyce and Ray were both interested in a variety of causes including the arts; the environment; and organizations like Planned Parenthood, Compassion & Choices and Funeral Consumers Alliance, supporting choices for family planning, reproductive health and end-of-life care. Their donor-advised fund simplified the process of giving to many organizations.

Now, Joyce just writes out the list of which organizations she wants to help and hands it over to the Community Foundation for the rest of the work. Joyce also appreciates that the partnership exposes her to new groups and initiatives that would benefit from her attention. When Joyce dies, a portion of her estate will benefit the Homan Family Fund, which will sustain her and Ray’s joint legacy by supporting their favorite charities and causes in perpetuity.

“I don’t think of myself as an inspiring human being,” she said. “I just love being able to give away money that I don’t need.” 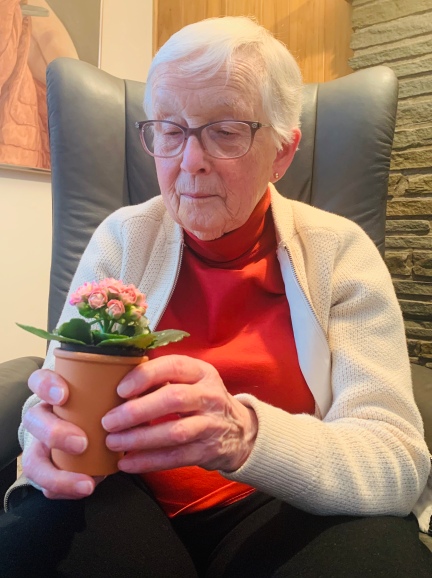