We Got Soaked, for ALS Awareness!

We were very excited, (and a little terrified!!), when we received the nomination to participate in the ALS “Ice Bucket Challenge”. Our friends at the Gifford Foundation nominated us in memory of former Gifford Foundation Executive Director, Kathy Goldfarb-Findling, who passed away from this terrible disease. A number of our staff members, including some from our management team, gladly accepted and volunteered to partake in the ice water douse, in addition to making personal donations for the benefit of ALS awareness.

For those unfamiliar with this viral phenomenon, the “Ice Bucket Challenge” is a social media campaign launched on July 29th, by the ALS Association to help bring awareness to Amyotrophic Lateral Sclerosis (ALS), also known as Lou Gehrig’s disease. Growing numbers of men, women, and children have shown their support for ALS by pouring a bucket of ice water over his or her head, posting a video of it to social media, and then challenging others do the same and/or make a donation to fight ALS within twenty-four hours.

While this viral initiative may seem unconventional, it has generated an unforeseen outpouring of support, with everyone from Ethel Kennedy to Justin Timberlake participating by getting doused and/or making a donation for ALS! The ALS Association and its 38 chapters have received an astonishing $5.7 million in donations compared to $1.12 million during the same time period last year. These donations have come from existing donors and 106,955 new donors to The Association. Contributions further The Association’s mission to find a cure for ALS while funding the highest quality of care for people living with the disease. With only about half of the general public knowledgeable about ALS, the Ice Bucket Challenge is making a profound difference.

Our management team and staff was excited to participate to help continue spreading awareness of this horrible disease.

Read below to see who everyone nominated to get doused! 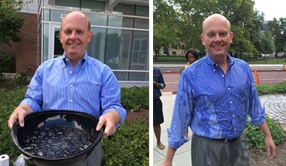 “I nominated my husband, John Owens, my mother, Janis Harrington Darby and my brother, William O’Brien. This disease took the life of my high school soccer coach Tom Schlegel three years ago, and more recently the amazing community connector Kathy Goldfarb Findling. I accepted this challenge and made a donation because we need to put an end to the suffering and loss that this illness inflicts on our families and communities.”

“I nominated my family to do the Ice Bucket Challenge! I’m doing this in honor of a friend and mentor who passed away from ALS.”

“I nominated my husband, Patrick Lane, to take the Ice Bucket Challenge next. “This is a cause that’s near and dear to my heart. My good friend’s family was deeply affected by ALS after her mother’s diagnosis and subsequent passing two years ago. I think the campaign has done wonders to bring national awareness and attention to the real challenges presented by this disease. I’m happy to be able to participate in some small way. I am donating to the ALS Association in memory of Leslie Lederman.”

“I nominate my other high school cohorts, who I know will want to support in honor of Scott as well – Andrea (Kipp) Paquette, Kathleen (Miller) Scott and Lisa (Grems) Dite. My high school friends, Lauren and Patrick Van Buskirk, have supported their father, Scott, who has been battling ALS for many years. Thankfully, he has been able to show this disease who is boss and is still with us. I am doing this, and making my donation, in their honor!”