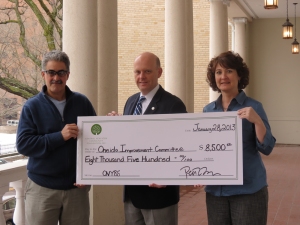 January 16, 2013 (Syracuse, NY) – Oneida Improvement Committee (OIC) was announced the winner of an $8,500 grant from the Central New York Community Foundation today after successfully garnering the most public votes in The CNY85 Giving Project’s final round. Twenty-seven nonprofit organizations were competing in the online vote, which ran the entire month of December. More than 50,000 total votes were cast before polls closed.

The OIC will use the award to create a non-motorized multiuse trail system in and around the City of Oneida. It will establish committees, recruit volunteers, design signage and work with local government, utility companies and homeowners to bring the trails to fruition. The trail system will connect shopping, neighborhoods, schools and parks, benefitting all who utilize its paths. The OIC projects that the new trail system will generate economic development, enhance the community’s quality of life and good health, improve the local environment, develop civic engagement, and preserve the area’s heritage.

The CNY85 Giving Project was created to engage the public in the Community Foundation’s 85-year anniversary celebration while also drawing attention to the many nonprofit organizations benefiting Central New York. The online campaign encouraged visitors to its website – cny85.org – to vote for a project once a day during the designated month. A full list of the projects that have participated so far can be viewed at www.cny85.org.

The month of December was the fourth and final voting period of The CNY85 Giving Project over the course of the year. The December round featured arts, culture, recreation and civic engagement projects.

Winners of the previous three rounds were as follows:

Round 1: Environmental, Economic Development and Transportation Projects – Madison County Office for the Aging

Each round features projects of different themes based on findings of a community indicators project, CNYVitals. The community indicators were the result of a collaborative effort between Syracuse University’s Maxwell School, FOCUS Greater Syracuse, the Central New York Community Foundation, city and county municipalities and a host of community-based organizations that have signed on to help gather and analyze the data on Central New York’s greatest needs.

The resulting data is a snapshot of Central New York’s current state of affairs within various interest areas. The architects of the project hope that making this information available to the general public will inspire collaborative discussion and action to address the community’s most pressing needs while also focusing funding and programming on projects and initiatives that will have the greatest positive impact on the region. All of the data can be viewed and contributed to at www.cnyvitals.org.

In 2012, the Central New York Community Foundation celebrated its 85-year anniversary. Founded in 1927, it strives to inspire philanthropy in Central New York by connecting the generosity of donors with community needs – making grants to organizations working to enhance the quality of life of those who live and work in Central New York from nearly 600 charitable endowment funds that it manages. Grants are awarded for programs in the areas of human services, arts and culture, education, environment, health, economic development and civic affairs. As the region’s largest endowed philanthropic foundation, the Community Foundation awards more than $5 million in grants to nonprofit organizations annually. The Community Foundation is located at 431 East Fayette Street, Syracuse, NY 13202 and can be reached at (315) 422-9538 or www.cnycf.org.